The Seventh Tokyo Conference on Advanced Catalytic Science and Technology (TOCAT7) was held from June 1 to 6, 2014 in Kyoto, Japan. Catalysis Society of Japan organized this meeting as a continuation of TOCAT (1990), TOCAT2 (1994), TOCAT3 (1998), TOCAT4 (2002), TOCAT5 (2006) and TOCAT6/APCAT5 (2010). The past six TOCAT conferences have earned a good reputation as a new series of international conferences on catalysis that has significantly filled the gap between research and technology in catalysis.

Our Agents in Japan, Astech Corp., attended and exhibited on behalf of Hiden Analytical. 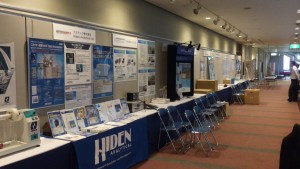