Plasma discharges are widely used in technical processes such as surface modification and thin-film deposition and etching. In this sense, the corresponding quantitative characterization of plasma sources is a topic of particular importance for a fundamental understanding of plasma sources as well as for a technological optimization of processes. Hydrogen plasmas play a certain role in technical discharges so that a precise determination of the absolute hydrogen fluxes to a plasma-treated surface is very desirable. This is important for understanding both the discharge mechanism and the plasma-induced processes at the surface. 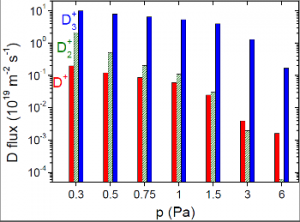 Figure 1: Ion-species-resolved deuteron flux as a function of the D2 gas pressure, measured at a constant microwave input power of 144 W and with the sample holder at floating potential

The resulting ion fluxes impinging on the substrate holder for a microwave power of 144 W are presented in Fig. 1 as a function of operating pressure in the range from 0.3 to 6 Pa. Even at the lowest investigated pressure of 0.3 Pa the dominating ion species hitting the sample surface is D3+. The dominant production pathway for this ion is an ion-molecule reaction in the bulk plasma. A D2+ ion collides with a D2 molecule producing a D3+ and a D atom. With increasing pressure the probability for this reaction increases so that the relative ion species composition changes. With increasing pressure more and more D3+ ions are produced at the expense of the primary D2+ ion which is produced in the bulk plasma by electron-induced ionization of D2 molecules. At pressures higher than about 1.5 Pa the total target current decreases due to a decrease of the plasma density, but still the relative contribution of D3+continues to increase. At the highest investigated pressure of 6 Pa the contribution of D2+ is almost negligible (less than 10-3). In contrast to D2+ the fraction of D+ does not significantly change. D+ is, as D2+, produced by electron-induced ionization of D2 molecules and additionally by direct ionisation of atomic D (D plasma concentration is about 1 %), but in contrast, the cross section for an ion molecule reaction of D+ is much lower than that of D2+. 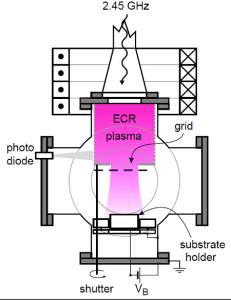 Figure 2: Schematic view of the experimental set-up. To quantify the particle flux to the substrate the substrate holder is replaced by a mock-up containing the EQP plasma monitor (not shown)