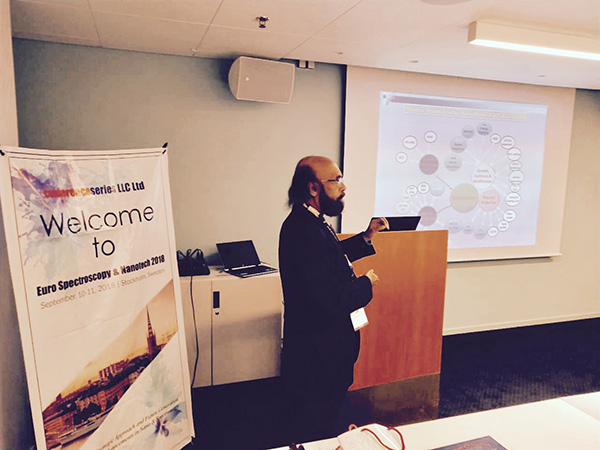 Participants across the globe attended the prestigious “Euro Spectroscopy 2018” held on September 10-11, 2018 at Stockholm, Sweden

Euro Spectroscopy 2018 was organized underlining the theme “Gaining critical insights in advancements in Spectroscopy and Analytical Techniques”. The program was a grand amalgamation of formats ranging from keynote sessions featuring many well-known and thought to provoke speakers to intense and highly interactive discussions which are intended in a way where researchers and technical staff from both academia and industry could interact creating a platform for the exchange of thoughts.

Spectroscopy is a study of absorption and emission of light and other radiation by matter, as related to the dependence of these processes on the wavelength of the radiation. More recently, the definition has been expanded to include the study of the interactions between particles such as electrons, protons, and ions, as well as their interaction with other particles as a function of their collision energy. Spectroscopic analysis has been crucial in the development of the most fundamental theories in physics including quantum mechanics, the special and general theories of relativity, and quantum electrodynamics. Spectroscopy, as applied to high-energy collisions, has been a key tool in developing the scientific understanding not only of the electromagnetic force but also of the strong and weak nuclear forces. Spectroscopic techniques have been applied in virtually all technical fields of science and technology.