Six riders set off from Dave’s Home in Warrington early on Friday morning, set for Bowness-on-Windermere. 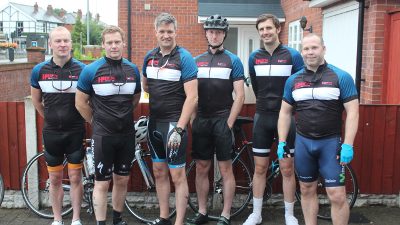 The start was early to miss the traffic on the first leg of 30 miles to Preston where a full English breakfast was awaiting the riders. The leg wasn’t trouble free however, with constant rain and two punctures slowing things down. 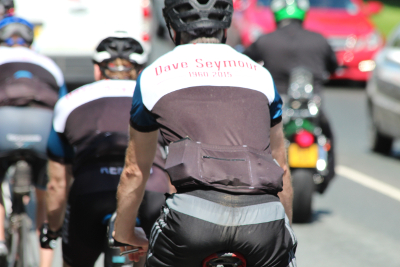 Morale was good after some extra tea and toast at the breakfast stop, and a course set for Carnforth another 30 miles away, where Janet and Michael Seymour and Honey the Labrador would meet the riders for Lunch. The rain persisted, but spirits were high, with plenty of banter and reciting of tales from Dave’s home and work lives. The riders were relieved to reach the lunch stop for a hearty fish and chips in sight of Morecombe bay in the sunshine. 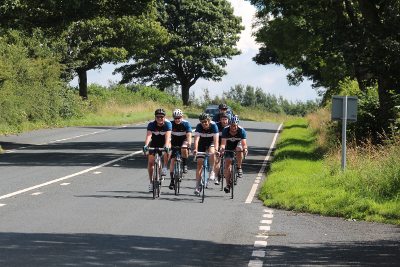 Up until this point, the route was flat and direct, luring the bunch into a false sense of security about the remaining 20 miles into the lake district. We arrived at the hills, tired from the previous 60 miles, and were treated to some tough climbs and spectacular scenery. Some riders struggled, but the promise that there was “only one hill to go!” was enough for them to battle on.

We rolled in to Bowness around tea time to be greeted by a cheering crowd and the champagne was promptly opened as we toasted Dave Seymour in his Holiday home. 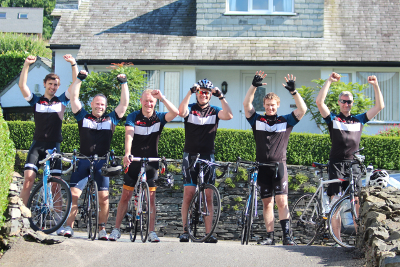 A big achievement and well done to all who participated. It looks like there will be a few more in the bunch next year!!!

Janet Seymour has set up a Just giving page for donations to the British Heart Foundation in Dave’s memory.

If you would like to donate offline, please contact Dane Walker and he will pass over any donations to Janet.