A lithium–oxygen battery based on lithium superoxide

Batteries based on sodium superoxide and on potassium superoxide have recently been reported1, 2, 3. However, there have been no reports of a battery based on lithium superoxide (LiO2), despite much research4, 5, 6, 7, 8 into the lithium–oxygen (Li–O2) battery because of its potential high energy density. Several studies9, 10, 11, 12, 13, 14, 15,16 of Li–O2 batteries have found evidence of LiO2 being formed as one component of the discharge product along with lithium peroxide (Li2O2). In addition, theoretical calculations have indicated that some forms of LiO2 may have a long lifetime17. These studies also suggest that it might be possible to form LiO2 alone for use in a battery. However, solid LiO2 has been difficult to synthesize in pure form18 because it is thermodynamically unstable with respect to disproportionation, giving Li2O2 (refs 19, 20). Here we show that crystalline LiO2 can be stabilized in a Li–O2battery by using a suitable graphene-based cathode. Various characterization techniques reveal no evidence for the presence of Li2O2. A novel templating growth mechanism involving the use of iridium nanoparticles on the cathode surface may be responsible for the growth of crystalline LiO2. Our results demonstrate that the LiO2 formed in the Li–O2 battery is stable enough for the battery to be repeatedly charged and discharged with a very low charge potential (about 3.2 volts). We anticipate that this discovery will lead to methods of synthesizing and stabilizing LiO2, which could open the way to high-energy-density batteries based on LiO2 as well as to other possible uses of this compound, such as oxygen storage. 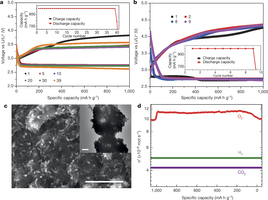