An Experiment Simulating Titan’s Atmosphere, as Probed by a Hiden Mass Spectrometer

In the recent paper “An atmospheric origin for HCN-derived polymers on Titan” by Perrin et al. 2021 published in Processes MDPI, we highlighted that the prebiotic HCN molecule is an effective precursor of Titan’s haze and confirmed the HCN-derived polymer nature of the haze.

Titan, the largest moon of Saturn, hosts a thick nitrogen-based atmosphere, where HCN is also efficiently produced by endogenous atmospheric photochemistry. Titan is moreover surrounded by an organic photochemical haze, which was probed by the Cassini/Huygens space mission [Tomasko et al., 2008 ;  Liang et al., 2007]. Its chemical composition has been studied by the Huygens space probe during its descent in Titan’s atmosphere in January 2005: HCN was found to be one of the main chemical signatures extracted from the aerosols after their pyrolysis and analysis by mass spectrometry [Israel et al., 2005]. These analyses pointed towards a hypothesis of HCN-derived polymer structure for Titan’s haze, but its chemical composition and formation process remained largely unknown.

Figure 1. Experimental device where the Hiden EQP 200 mass spectrometer (Quadrupole diameter : 6mm) is coupling to the plasma reactor (1) by orifice fitted (100µm) allowing sampling in the plasma with Z-drive (3) and the gate valve (2).

To investigate this question, we simulated the atmospheric haze formation process experimentally. The atmospheric chemistry occurring in Titan’s atmosphere was simulated with a plasma experiment at LATMOS-University of Paris-Saclay [Szopa et al., 2006]. The reactor was flowed at room temperature and at a total gas pressure of 0.9  mbar, ensured by the addition of the 95-5% N2-CH4 reactive gas mixture consistent with Cassini-INMS in situ measurements [Waite et al., 2005]. The energy distribution of the electrons in the plasma discharge was similar at first order to the energy distribution of solar photons, with a maximum at ~ 1-2 eV [Szopa et al., 2006, Alves et al., 2012]. Analogues of Titan’s haze were produced continuously in the discharge and were collected for size and morphology analysis by Scanning Electron Microscopy. The gas phase composition was monitored simultaneously with the haze production in situ by a Hiden EQP 200 mass spectrometer (see figure 1).

We were particularly interested in the time-evolution of the masses corresponding to methane (m/z 16), and hydrogen cyanide (m/z 27). The change in the consumption of methane is indeed an indicator of the appearance and growth of the nanoparticles in the discharge [Wattieaux et al., 2015]. As soon as the aerosols appeared and grew in the plasma (Figure 2), a consumption of HCN present in the gas phase was observed. During this growth, the morphology of analogues of Titan’s haze evolved. SEM images showed primary monomers coagulating to form aggregates, then continuing to grow to larger spherical grains. We showed that HCN is progressively incorporated in Titan’s haze analogues, confirming the HCN-derived polymers nature of this complex organic matter. 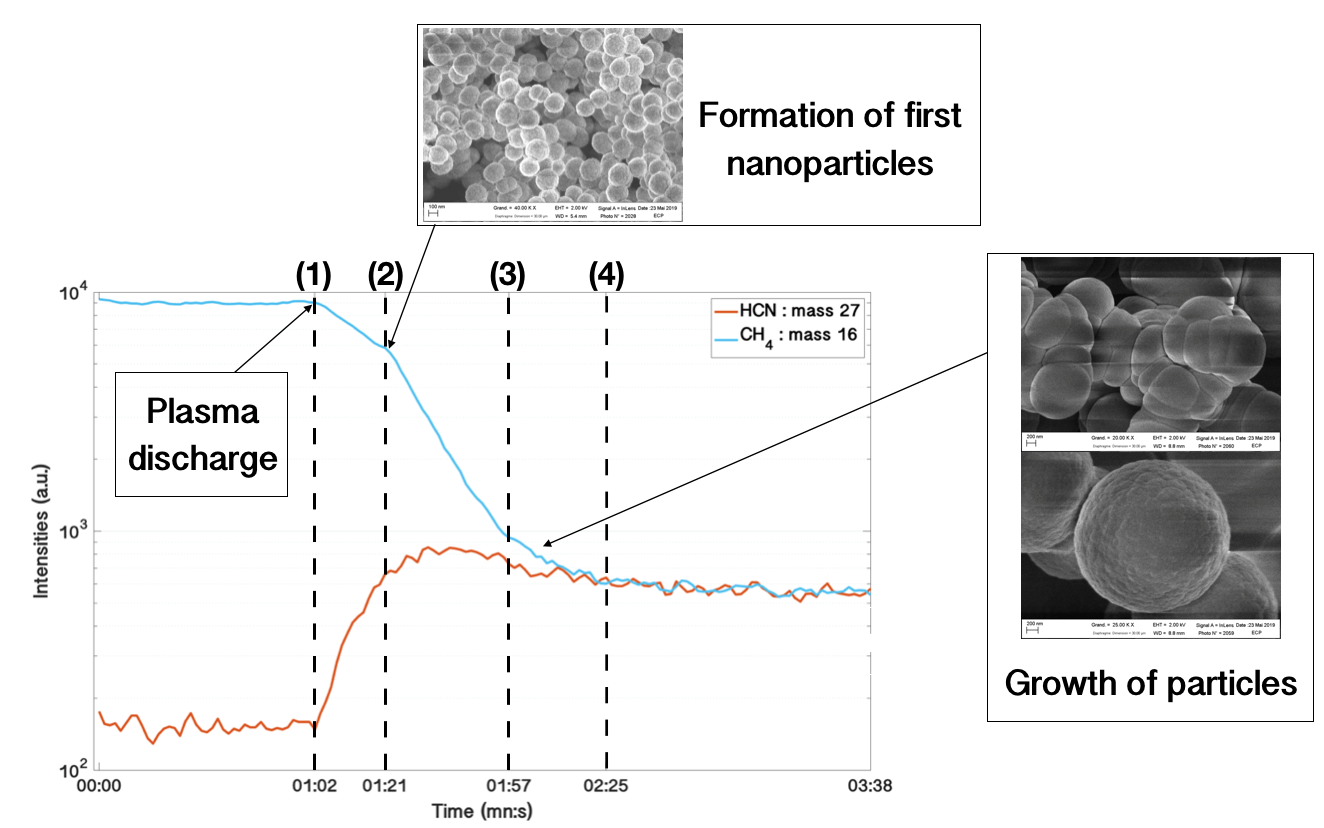 Figure 2. Time evolution of the masses m/z 16 (CH4), 27 (HCN), obtained with a Hiden EQP 200 mass spectrometer. (1):  From one minute, a plasma discharge is triggered and ionizes the injected gas mixture and dissociates in particular the methane (first slope of decrease CH4). (2): Apparition of primary monomers in the plasma (second decay slope of CH4). Between (2) and (3), the primary monomers grow spherically down to a few hundred nanometres. (3): Formation of aggregates of primary monomers (third decay slope of CH4). Between (3) and (4): The aggregates evolve into micrometric monomers. After (4), the particles exit the plasma and sediment at the bottom of the reactor.