The demand for electric vehicles has inspired extensive efforts to develop solid oxide fuel cells (SOFCs) for transportation. However, the high cost of hydrogen fuelled SOFC systems and the deactivation of Ni-YSZ anodes in hydrocarbon fuels hinder the progress of SOFCs’ development and commercialization. In this study, a unique SOFC design based on a multi-functional anode was reported to directly utilize transportation fuels (iso-octane, a common surrogate for gasoline) as fuel, demonstrating excellent performance and stability at intermediate temperature range.

As schematically shown in Fig. 1a and b, the multi-functional anode consists of two layers: an outer catalyst layer for reforming of hydrocarbon fuels and an inner active anode layer in direct contact with the electrolyte for electrochemical oxidation of the reformed fuels.  The outer catalyst layer (Ni-YSZ-BZY) significantly enhances the tolerance to coking because the discrete BaO nanoparticles on the Ni surface (Fig. 1c) and the thin-film BZY coating on the YSZ (Fig. 1d) can strongly uptake water, which plays a vital role not only in promoting octane reforming but also in facilitating water-mediated carbon removal to avoid coking. 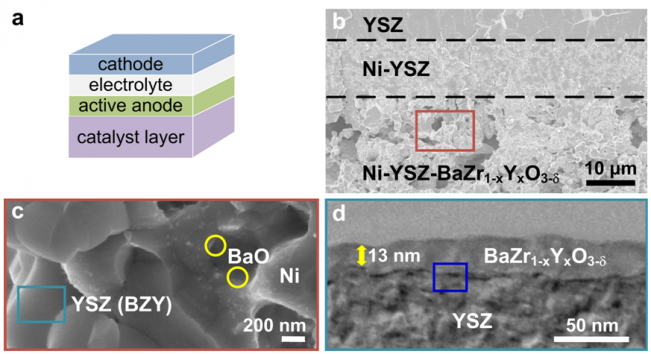 Figure 1: The architecture of a Ni-YSZ-BZY supported cell and microanalyses of the new anode. (a) Schematic of a SOFC based on a multi-functional anode; (b) a typical cross sectional view of a Ni-YSZ-BZY supported porous Ni-YSZ active anode layer and a dense YSZ electrolyte; (c) a higher magnification of a small area in the Ni-YSZ-BZY layer shown in (b); (d) a cross-sectional view (TEM image) of a BaZr1-xYxO3-δ (BZY)-coated YSZ grain shown in (c);

Shown in Fig. 2a are the performances of a Ni-YSZ-BZY supported cell with wet (3v% H2O) iso-octane (6.5 % in Ar) as fuel, demonstrating peak power densities of 0.6 and 0.1 W/cm2 at 750 and 600oC, respectively, comparable to those reported with Ru-CeO2 as catalyst while using extra air and CO2 (5% iso-octane-9 % air-86 % CO2) in the fuel for reforming the iso-octane to avoid coking.  In this novel cell design, by contrast, humidified (3 % H2O) iso-octane (6.5% in Ar) was used as the fuel without addition of any O2 and/or CO2, dramatically reducing the system complexity and cost for fuel management. Presented in Fig. 2b are the current densities of two different anode supported cells operated at a cell voltage of 0.7 V at 750oC with the fuel switched from humidified H2 to dry or wet iso-octane (6.5% in Ar).  A stable power output was observed for the cell supported by Ni-YSZ-BZY with wet iso-octane (6.5 % in Ar) as the fuel, achieving a relatively stable current density of ~0.56 A/cm2 at 750 °C. In contrast, the current output of the conventional Ni-YSZ supported cell dropped to zero quickly due to severe carbon build-up on the Ni-YSZ anode. 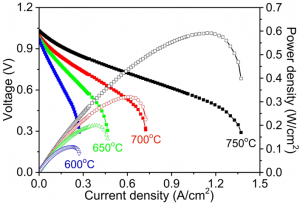 Figure 2 (a): Typical performance of the cell measured at 600 to 750oC with wet so-octane as fuel. 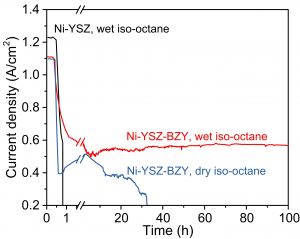 Figure 2 (b). Current density as a function of time for the Ni-YSZ and Ni-YSZ-BZY supported cells operated at 750ºC at a constant cell voltage of 0.7 V as the fuel was switched from humidified H2 to dry or wet iso-Octane (6.5% in Ar)

Shown in Fig. 3 are the concentration profiles of the effluent gas from a Ni-YSZ-BZY supported cell as a function of operating temperature. The concentration of CO2 remained relatively low and constant in the temperature range studied, indicating that the rate of electrochemical oxidation and/or reforming of carbon species to CO2 were relatively low. The concentration of H2O increased significantly with temperature due to the corresponding increase in current density (oxygen flux) or electrochemical oxidation of H2 and C2H4. Thus, the concentrations of H2 and C2H4 decreased with temperature accordingly. It is noted that the cell operated under low fuel utilization is more susceptible to coking because the tendency for coking decreases with fuel utilization when more oxidation products (CO2 and H2O) are produced in the anodic compartment. 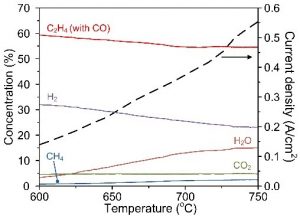 Figure 3: Effect of temperature on internal reforming of iso-octane. Concentration profile (as determined by a mass spectrometer, Ar was removed from the calculation) of the effluent gas from the Ni-YSZ-BZY supported cell as a function of operating temperature.

The unique properties of the bi-layer anode are attributed to the nanostructured BZY coating on the YSZ phase and the BaO nanoparticles on the Ni surface of the composite anode, which can be created by a simple and cost-effective modification of the existing processes for fabrication of the state-of-the-art SOFCs based on YSZ electrolyte. High-performance fuel cells that run on transportation fuels hold great promise for electric and hybrid electric vehicles. 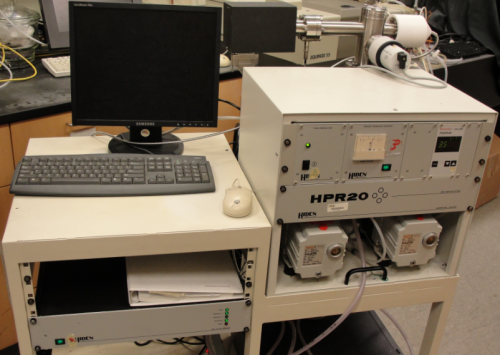 Photo: The Hiden Analytical HPR-20 QIC R&D in the School of Materials Science and Engineering, Georgia Institute of Technology