Using additives/catalysts to destabilize hydrides of high hydrogen storage density, e.g. MgH2 with 7.6 wt.%-H and desorption temperature as high as 300-400 oC, is one of the most important strategies to overcome the hurdle of applying hydrogen storage materials in technologies related to hydrogen energy. Despite tremendous efforts, the development of additives/catalysts with high catalytic activity and easy doping remains a great challenge. In this work, we report a simple method to induce a novel symbiotic CeH2.73/CeO2 catalyst in Mg-based hydrides, which is capable of being mass produced. The first step is to hydrogenate the amorphous Mg-Ce-Ni alloy to get a multiphase composite of MgH2, Mg2NiH4 and CeH2.73, and the second step is to oxidize the hydrogenated sample to generate CeO2 from CeH2.73. Moreover, we reveal a spontaneous hydrogen release effect at the CeH2.73/CeO2 interface, which leads to a dramatic increase of catalytic activity compared with either the CeH2.73 or CeO2 catalyst alone. TPD-MS analysis was performed on a Hiden QIC-20 mass spectrometer (Figure 1a). With the increase of the CeH2.73 to CeO2 ratio, the hydrogen desorption temperature decreases at first and then increases after reaching the trough at the molar ratio of 1:1. The catalytic activity of the symbiotic CeH2.73/CeO2 might have a close relationship with their interface density, which reaches the maximum when molar ratio of CeH2.73 to CeO2 is 1:1, however, the mechanism is not well understood. The lowest dehydrogenation onset temperature is only ~210 °C in the presence of the symbiotic CeH2.73/CeO2, which is ~210 °C lower than that of conventional MgH2. 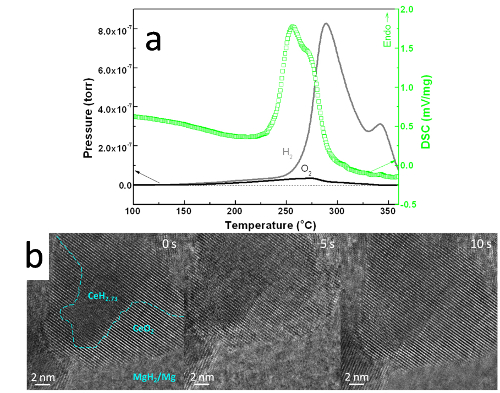 Figure 1. (a) DSC and TPD-MS curves of the symbiotic CeH2.73/CeO2 doped MgH2, heating rate of 2 K/min. (b) In situ HRTEM images of the dehydrogenation process, boundary between CeH2.73 and CeO2 is roughly drawn with a dash line at the beginning of hydrogen desorption

The dynamic boundary evolution during hydrogen desorption was observed in the symbiotic CeH2.73/CeO2 at atomic resolution using in situ High-Resolution Transmission Electron Microscope (HRTEM) Figure 1 (b)).

The boundary region suffers severe distortions and the distorted areas fluctuates wave-like during hydrogen desorption, suggesting that the interface region of the symbiotic nanocrystals undergo structural evolution at the atomic scale, which presumably plays a prominent role for the release of hydrogen in dehydrogenation. Combining the ab-initio calculations, which show significant reduction of the formation energy of hydrogen vacancy in the CeH2.73/CeO2 boundary region in comparison to those in the bulk MgH2 and CeH2.73, we demonstrate that the outstanding catalytic activity can be attributed to the spontaneous hydrogen release effect at the CeH2.73/CeO2 interface.