Capacitively coupled plasma (CCP) sources have a variety of important applications, which make use of the interaction of active species (ions and radicals) created in the plasma volume with the surface materials of the electrodes. Due to the radio frequency (RF) excitation, the electrode materials are not restricted to be conducting, as RF current can flow through dielectric materials as well. For plasma sources with largely uneven powered and grounded surfaces (where usually the powered electrode is much smaller than the grounded surface), a significant negative self-bias voltage VDC develops and the plasma potential Vp is lower as compared to that in symmetrical systems. However, one can eliminate the self-bias voltage by grounding the powered electrode for the DC component. DC grounding the powered electrode has strong implications on the plasma properties and leads to an increase of the plasma potential to several hundreds of volts (as compared to few tens of volts commonly observed in typical highly asymmetric CCPs). In this research, we studied in depth the properties of CCP with DC-grounded electrodes experimentally as well as via simulations. We also studied the influence of the conducting properties of the powered electrode’s surface (from 100% conducting to 0% conducting) on the resulting plasma properties. 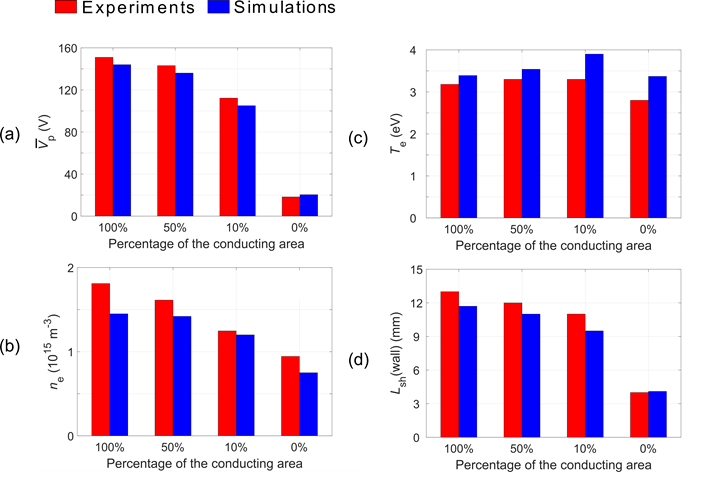 Figure 1. Comparison of experimental and simulation results for the (a) plasma potential Vp (b) electron density ne (c) electron temperature Te and (d) sheath thickness Lsh at the wall, for discharges with powered electrodes having different percentages of conducting surface area.

The plasma properties were measured experimentally in the different cases via a HIDEN ESPion Langmuir probe. In parallel, PIC/MCC simulations were performed for the different powered electrodes. The experimental results were in good agreement with the simulation outcomes for all the electrode configurations tested as can be observed in figure 1. Changing the conducting area of the powered electrode significantly influenced the properties of the plasma. The plasma potential increased to the order of the RF voltage amplitude in the case of the conducting electrode (147 V), while the electrode itself had a zero self-bias due to the DC grounding. In the case of the electrode covered with an insulating dielectric, there was no flow of DC current through the electrode and the effect of DC grounding was not observed. The plasma potential remained low and a high negative self-bias (−167 V as obtained from the simulations) developed on the surface. The results show that the plasma properties obtained with an insulating electrode with DC-grounding are effectively similar to those obtained with a conducting electrode in a regular CCP (without DC grounding), with the major difference being that the charging occurs at the plasma surface interface in the former instead of the matching network or blocking capacitor.

To find out more about this product visit the ESPion product page or if you would like to contact us directly please Send us a Message.