The aim of this work was to study the surface acidic properties of oxide catalysts and carriers (g-Al2O3, CeO2, ZrO2, SiO2, TiO2, HZSM5 zeolite), comparatively probing their surfaces by ammonia temperature programmed desorption (ATPD) measurements. ATPD is a simple and reliable technique in which a surface, after saturation with ammonia at low temperature, is subject to a temperature ramp, which causes desorption of the probe molecule along with a temperature profile. By qualitatively and/or quantitatively analyzing the desorption pattern, it is possible to obtain information about the adsorption/desorption energy and the quantity of ammonia that has been adsorbed on the surface (ammonia uptake). Since ammonia is a basic molecule, it can be used as a probe to investigate surface acidity. This information can help understand the catalytic behavior of a sample, or even help in fine tuning the synthesis of new systems. Instead of using a traditional TCD Detector for this task, we employed a Quadrupole Mass Spectrometer (Hiden HPR-20 EGA) connected through a heated capillary to our testing apparatus. 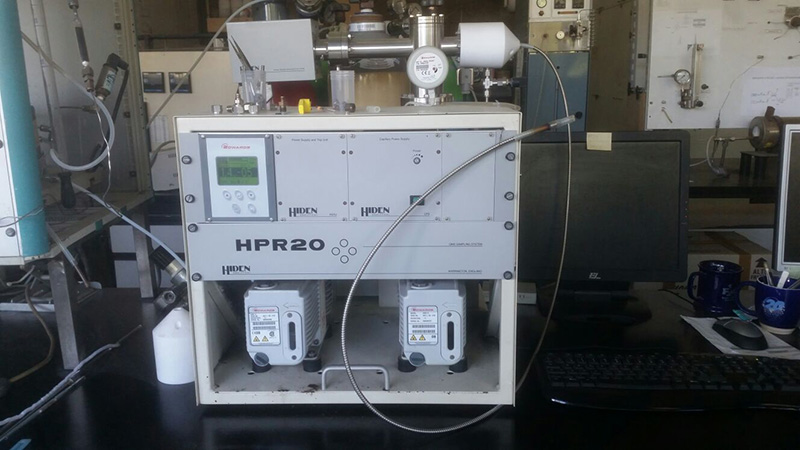 The use of a QMS allowed us to easily discriminate between the different species desorbing from our surfaces, without the use of any kind of chemical or physical filter and traps which could negatively affect our analyses. By properly tuning the ionization potential of our instrument, we were also able to avoid water molecule fragmentation and related interference with the ammonia m/z signal. The reliability and accuracy of the ATPD data were assessed by theoretical criteria and experimental tests highlighting the effects of carrier gas, data acquisition mode, catalyst particle size and reactor geometry, remarking the flexibility of the technique employed. All of the studied materials featured complex ATPD patterns spanned in the range 423-873K, except for ceria which showed a narrow and resolved desorption peak, indicative of homogeneous weak acidity. Quantitative data signalled a difference of more than one order of magnitude in ammonia uptake between silica and the other materials. Since the ATPD profiles of ceria match Gaussian curves regardless of heating rate and surface coverage, the patterns of the studied materials are described as linear combinations of four Gaussian functions related to weak, medium, strong and very strong site populations. After collecting all the profiles, we were able to apply ATPD modelling analyses to get information about the energy of adsorption of the probe molecule related to each desorbing temperature. The cumulative energy site distributions indicated the following acidity scale based on the average energy (expressed in kJ/mol) value (e.g., surface coverage q=0.5)

In order to acquire additional information on the functionality of the studied materials, we performed dehydration of isopropanol to propylene as a probe reaction. The results obtained matched the ones previously uncovered by ATPD measurements in terms of abundance and strength of surface acid sites, but also let us distinguish between Brønsted and Lewis acidic sites. 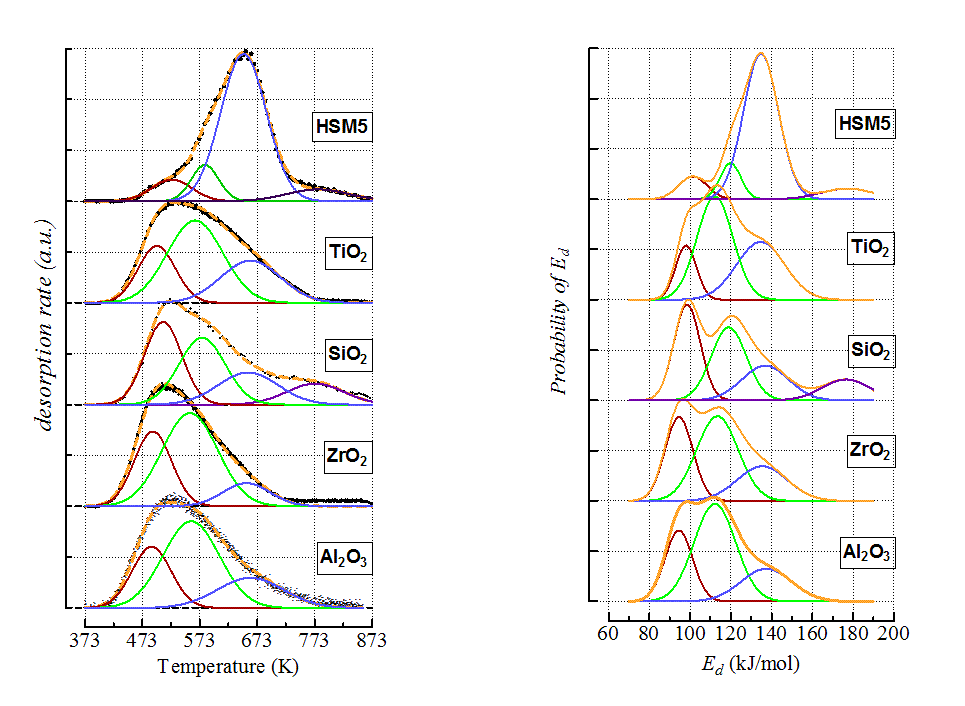