Pulsed laser deposition (PLD) has proved to be an outstanding technique for the deposition of complex oxide thin films due to its ability to congruently transfer the target composition to the deposited film. The deposition of many oxides is usually conducted using a pulsed KrF laser (λ= 248 nm corresponding to 4.99 eV/photon) with a pulse length of a few 10 ns in an O2 background gas. The wavelength combined with the pulse length results in a plasma plume consisting largely of monoatomic plasma species (excited, ion, and neutral species plus electrons). The background gas moderates the kinetic energy of the expanding plume species, forming additional ions and excited state species. In addition, O2 can act as a reactive background gas adjusting the oxidation of the ablated species and of the film. The gas-phase reaction dynamics and kinetics in a laser induced plasma are very much dependent on the interactions of the laser ablated target material and the background gas. As ions from the ablation process have a wide kinetic energy range, the question of interest is to determine the favourable kinetic energy window at which plasma species react/interact with the background gas molecules to form neutral and ionic metal-oxygen (MO) species. 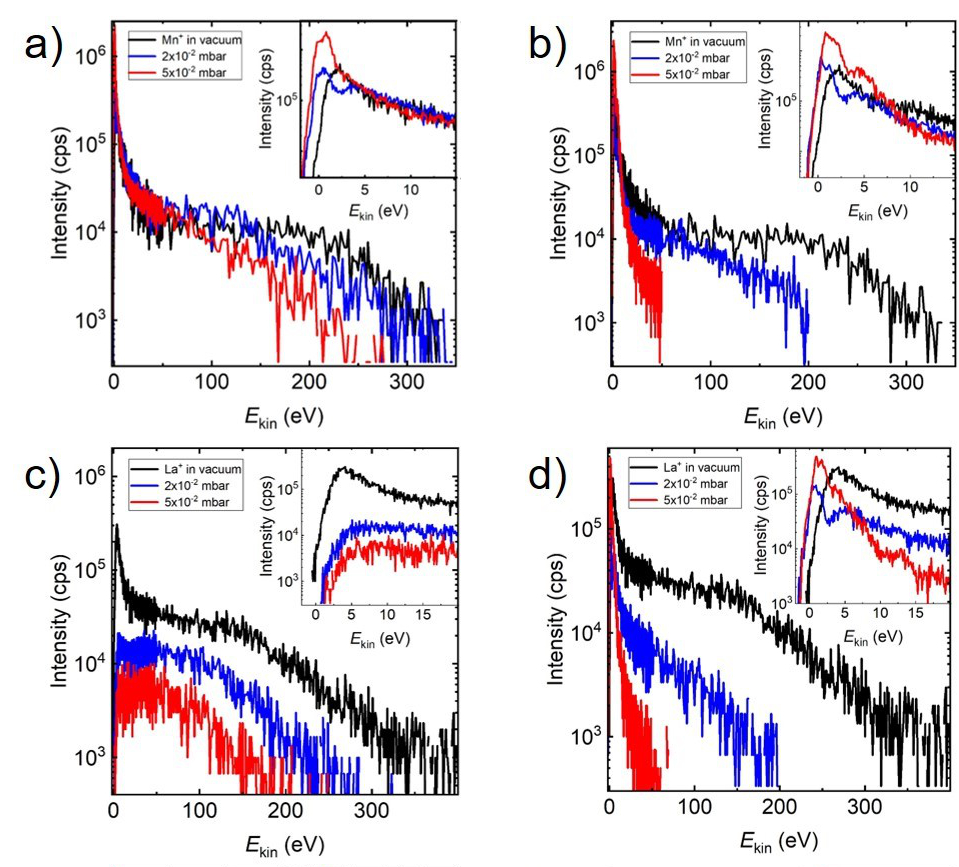 Additionally, there is a favourable energy window where plasma species react with the background O2 since a significant amount of MO+ species with low energies are detected with increasing pressure as a result of the formation ofMO species. At a high oxygen background pressure, the preferred kinetic energy range to form MO species as a result of chemical reactions in an expanding plasma is up to 5 eV. We have further shown that the chemical activity of species for ablation in an oxygen background is reflected in the kinetic energy profile. Purely inelastic scattering is leading to a more discreet energy profile with several kinetic energy maxima as a result of excitations, ionization and dissociation processes (inset Fig. 1b, d) whereas added chemical activity results in a smooth kinetic energy distribution (inset Fig. 1a, c).

To find out more about these products visit the EQP Series product page or if you would like to contact us directly please Send us a Message.