The ability of mixed ionic and electronic conducting (MIEC) perovskite oxides (ABO3) to support both electronic and ionic conductivity, as well as their favourable catalytic properties and chemical and redox stability, make them promising electrode materials. MIEC perovskite oxides have received substantial attention in multiple applications in energy conversion and storage devices, such as solid oxide fuel/electrolysis cells (SOFC/SOEC), oxygen transport membranes (OTMs), electrochemical sensors, and electrocatalysts for water splitting. In applications such as these, the rate of oxygen exchange across the gas – MIEC solid interface under various conditions often determines the overall performance of the device. The surface exchange mechanisms and kinetics have therefore been the focus of many studies. However, the majority of research has been carried out under dry oxygen environments, while practical operating conditions can be significantly more complicated.

Figure 1 presents the Arrhenius plots of the surface exchange coefficients, k, obtained in the three conditions. 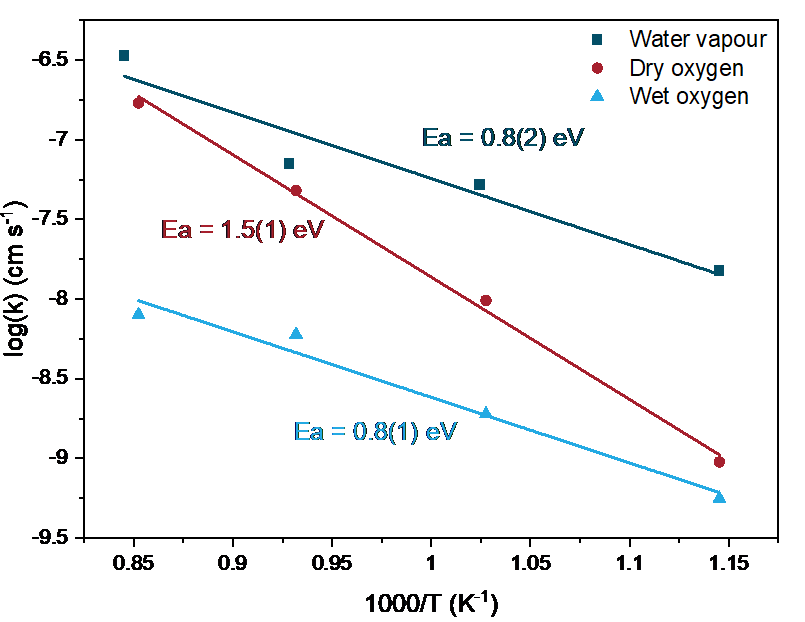 In Figure 1, an increase in k of up to 2 orders of magnitude was observed on the samples annealed in water vapour, and a decrease in activation energy of 0.7 eV was observed for water surface exchange compared to oxygen surface exchange. The significant enhancement in k is due to the greater oxygen vacancy concentration formed on the sample surface in water vapour, as well as the differing surface exchange mechanisms of water and oxygen molecules studied through in-situ RGA. A potential mechanism for water surface exchange on MIEC electrodes is described in Equations 1 and 2 and illustrated in Figure 2, in which the adsorption and dissociation of H218O in the gas phase occurs on a surface oxygen vacancy site to form hydroxyl groups, and further incorporation of the 18O ions occurs via desorption of H216O molecules [2]. 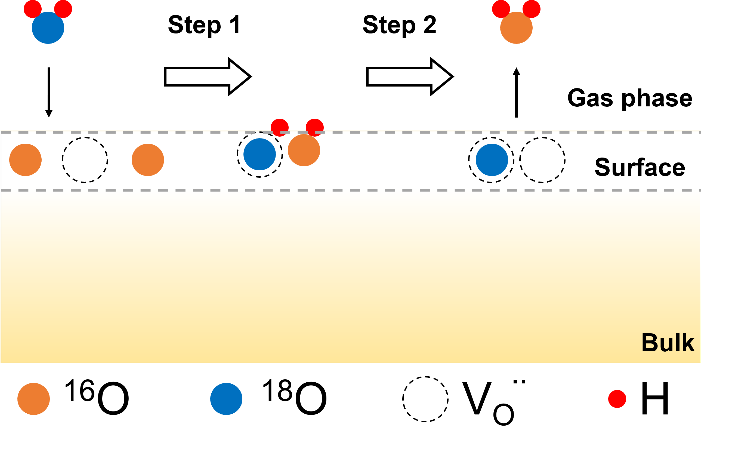 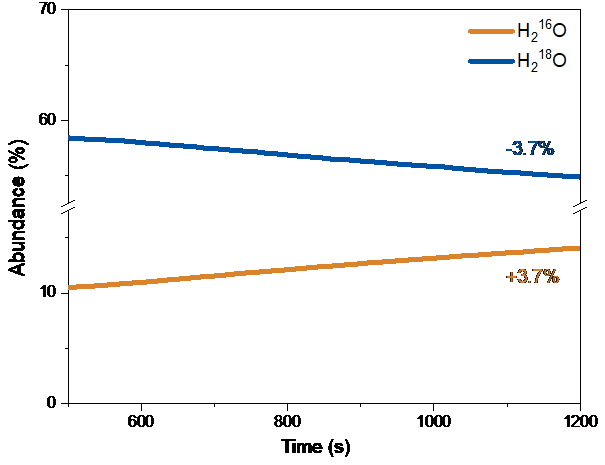 The non-redox oxygen exchange, in contrast to the oxygen reduction reactions (ORR), and the formation of the hydrogen bonds, could lead to the enhanced surface exchange properties. In addition, the lowest k values were found on the samples exchanged in the wet oxygen atmosphere. This is due to the competition between water and oxygen molecules for the surface oxygen vacancy sites, as well as the molecular scrambling behaviour between H218O and 16O2 forming 16,18O2 probed through in-situ RGA [1]:

Our studies demonstrate that water-induced oxygen transport kinetics and mechanisms can be significantly discrete from those of molecular oxygen, leading to a general design guideline for the performance of MIEC electrodes. Using both SIMS and in-situ gas phase analysis provided the detail required to explain the exchange phenomena in this complex environment.

To find out more about these products visit the RGA product page or if you would like to contact us directly please Send us a Message.