Ion Energies in a Chamber with an Inverted Electrode Geometry

Ion-surface interaction plays a key role in several technological plasma applications such as physical and chemical sputtering, thin film deposition, surface modification, or ion implantation. For a systematic investigation of ion-induced changes in surface properties, a controllable, monoenergetic ion flux to the surface is required. To allow for surface treatments of conducting and non-conducting samples with an independently controlled ion energy and ion current density, we built a setup based on an rf-biased inductively coupled plasma (ICP) that uses an inverted electrode geometry in which the electrode with the larger plasma-facing surface – in our case the vacuum chamber wall – is driven with the capacitively coupled rf-bias power while the electrode with the smaller plasma-facing surface is grounded. The planar ICP coil is placed in a quartz cylinder and driven by another rf power supply. With such a geometry, the chamber wall develops a positive dc self-bias and a large sheath potential is observed in the sheath in front of the grounded electrode at which the ion energy distribution is measured. We used the high-energy version of the HIDEN Analytical PSM003 energy-selective mass spectrometer to proof in-situ the independent control of ion energy and flux with the rf-bias power and ICP power, respectively. The ion energy is controllable in the range of about 10 eV to a few 100 eV and the ion flux changes by about two orders of magnitude when using the rf-bias only (CCP) vs. the ICP combined with the rf-bias. Deviations from the desired monoenergetic energy distribution occur due to charge exchange collisions in the sheath as well as the sheath potential variation during an rf cycle. We show that the amount of low energy ions in the CCP mode due to collisions in the sheath can be reduced by reducing the (partial) pressure of the working gas (here: Ar) by diluting it with helium. The larger ionization energy of helium leads to low amount of He+ ions in the ion flux to the surface up to a mixture of about 90 – 95% helium and 5-10% argon that significantly reduces the amount of collisions in the sheath. In ICP mode the higher plasma density strongly reduces the sheath width which makes collisions in the sheath rare anyway. However, the lower sheath width also broadens the bimodal peak structure due to the shorter ion transit time through the sheath and the variation of the sheath potential. We discuss possible solutions of narrowing the broadened bimodal peak structure by increasing the rf-bias frequency or increasing the ion mass of the working gas e.g. by using krypton or xenon. The setup is currently in use for the surface optimization of electrode materials used in rechargeable zinc-air batteries. 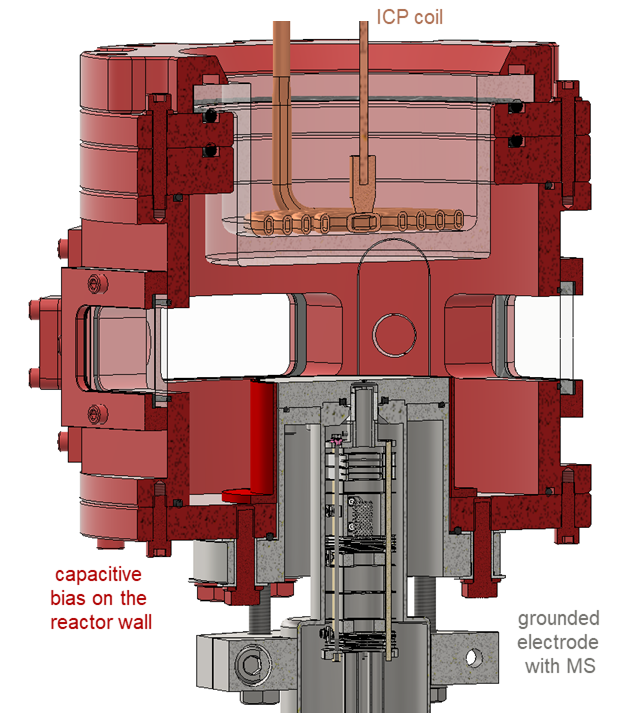 To find out more about these products visit the PSM product page or if you would like to contact us directly please Send us a Message.