Water gas shift (WGS) reaction is an important reaction for carbon monoxide removal, and the catalysts for the reaction have been investigated over the past three decades. Although many researches have revealed that noble metals enhance the activity of WGS catalysts, the price of these metals creates concerns. This is why noble metal free catalyst is required for water gas shift reaction.

We examined activity tests with various pre-reduction conditions using K/Co3O4. The measurements were made with a Q-Mass (Model QGA; Hiden Analytical Ltd.). It is noteworthy that K/Co3O4 shows no activity if it is not pre-reduced. Pre-reduction was conducted using H2 or CO+H2. The K/Co3O4 catalyst pre-reduced with syngas (CO+H2) showed high and stable WGS activity. However, K/Co3O4 pre-reduced by H2 showed not high WGS activity. K/Co3O4 pre-reduced by syngas (CO+H2) also showed high selectivity to CO2 and H2 more than 99%, and carbon deposition was under the detection limit of a temperature programmed oxidation apparatus. 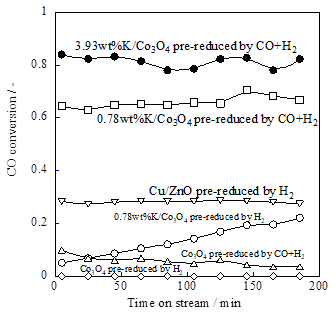 XRD measurements were conducted to analyze the structure of the support after reduction by CO, H2, and CO+H2. After H2 reduction, all peaks were attributed to Co metal. However, after CO or CO+H2 reduction, several peaks showing Co2C were observed. The spectra after CO reduction also include some peaks that are attributed to CoO. Therefore, H2 has too much of a strong reduction property. CO pre-reduction for 3.93wt%K/Co3O4 caused the low initial activity. Pre-treatment by syngas is more favorable than pre-treatment by CO. Moreover, to clarify whether CoO shows WGS activity or not, we conducted activation tests using K/CoO without pre-reduction. However, it showed no WGS activity at all. Considering these results, Co2C is apparently an important active species to proceed with WGS reaction.

To clarify the fine structure of Co, EXAFS measurements were investigated. Co foil was used as a reference sample. The most noticeable peak on Co foil shows that the Co–Co bond is near 0.2 nm. The same peak appeared both for 0.78wt%K/Co3O4 and 3.93wt%K/Co3O4. The peak, however, was stronger with lower loading amount of K. This trend is the same as that of results shown in XPS spectra for Co2p3. When the loading amount of K is lower, the bulk structure is also reduced to Co metal, and carbide formation is difficult.

In conclusion, we investigated the activity of a noble metal free Co-system catalyst for a water gas shift (WGS) reaction. K/Co3O4 catalyst shows no WGS activity without pre-treatment, but it shows high stable activity after pre-reduction with syngas for 200 min. Pre-reduction by syngas can form Co2C as active sites more effectively than either CO or H2 reduction. Potassium loading stabilizes the catalyst structure in a reduction atmosphere, and has an electron-donating effect. Loading potassium suppresses excess reduction of Co-oxide to metallic Co.

To find out more about this product visit the QGA product page or if you would like to contact us directly please Send us a Message.