Low-energy inert-gas ion irradiation of the film surface during refractory transition-metal (TM) nitride growth by conventional DC magnetron sputtering has been used extensively to overcome the characteristically underdense microstructures with rough surfaces of layers deposited at low temperatures (Ts /Tm < 0.30, in which Ts is the film growth temperature and Tm is the melting point in K).[i] We recently demonstrated that high-power pulsed magnetron sputtering (HIPIMS) provides an alternative route for ion-assisted TM nitride film growth via the use of substrate bias, synchronized to the metal-rich portion of the plasma pulse. Stresses can be dramatically reduced, or even eliminated, since metal (as opposed to inert-gas) ions are components of the film.[ii],[iii]

In this project we use a hybrid HIPIMS/DCMS two-target co-sputtering configuration, in which one target (either Ti or Si) is powered by HIPIMS while the other is powered by DCMS, for growth of Ti1‑xSixN films with compositions 0 ≤ x ≤  0.26. Markedly different film growth pathways are obtained depending upon which target is powered by HIPIMS with, in both cases, a substrate bias applied in synchronous with the HIPIMS pulse. The observed divergence in film nanostructure, phase content, and mechanical properties between layers grown in Ti-HIPIMS/Si-DCMS and Si-HIPIMS/Ti-DCMS configuration is due to distinctly different metal-ion irradiation conditions, Ti+/Ti2+ vs. Si+/Si2+, during film growth, as determined by the ion mass spectrometry analyses performed at the substrate position with a Hiden Analytical EQP 1000 instrument (see Fig. 1(a)-(b)). 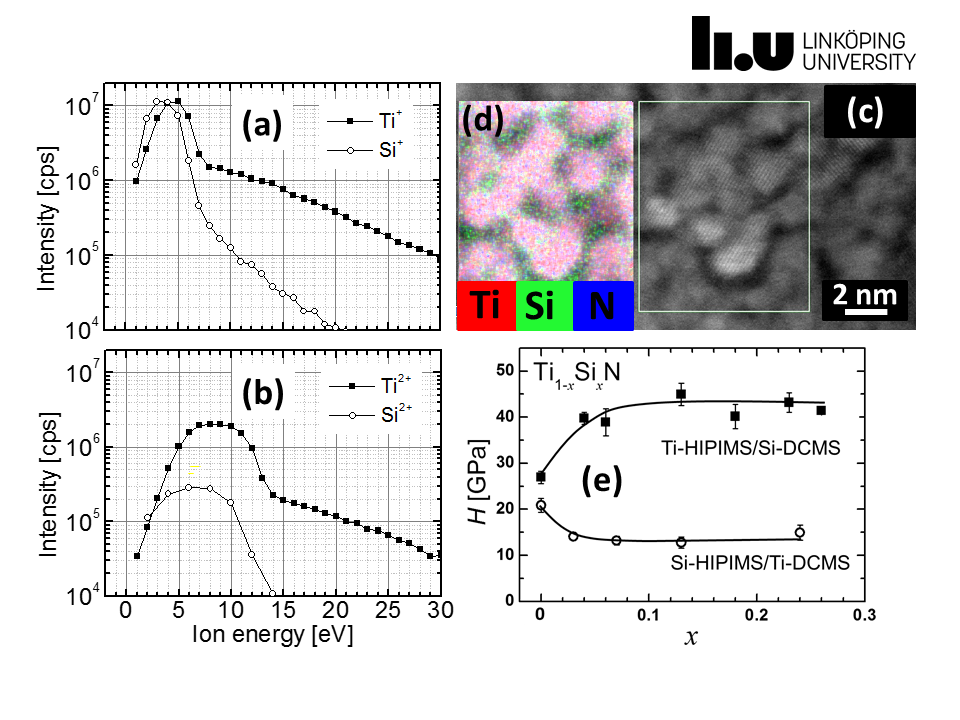 A better mass match between incident Ti+ ions and the average film atomic mass, higher metal-ion/metal-atom ratios, and a high fraction of doubly-ionized species results in an average momentum transfer per deposited atom  ~20 times higher for Ti-HIPIMS/Si-DCMS than during Si-HIPIMS/Ti-DCMS. As a consequence, adatom mean free paths are increased leading to the segregation of smaller Si atoms to column boundaries and the formation of a nanocomposite structure consisting of TiN-rich nanocolumns encapsulated in SiNx tissue phases (cf. plan-view STEM micrograph in Fig.1(c), and EDX/STEM elemental maps in Fig. 1(d)). Ti-HIPIMS/Si-DCMS Ti1‑xSixN films are superhard over a composition range that is significantly wider than reported previously, 0.04 ≤ x ≤ 0.26, with a maximum hardness, H = 45 GPa, for layers with x = 0.13 (see Fig. 1(e)). However, residual stresses are also high with an average value of ‑7±1 GPa.

In sharp contrast, during Si-HIPIMS/Ti-DCMS Ti1‑xSixN film growth, the flux of doubly-ionized metal ions is lower which, together with the lower mass of Si, low metal-ion/metal-atom flux ratio during HIPIMS pulses, and poorer mass match between incident Si+ ions and average film atomic mass results in relatively low  values. As a consequence, Si is trapped in the metastable Ti1‑xSixN NaCl structure to form solid solutions over the highest compositional range yet reported, 0 ≤ x ≤ 0.24.