Thin films of metastable NaCl-structure Ti1-xAlxN exhibiting high hardness (typically ~30 GPa) and good high-temperature oxidation resistance are used for wear protection in a wide variety of applications ranging from cutting tools to mechanical components in the aerospace industry. Enhanced performance is obtained at elevated temperatures for alloy films with high AlN content. The calculated Ti1-xAlxN enthalpy of mixing is positive over the entire range of composition and reaches a maximum (corresponding to the largest driving force for decomposition) at x = 0.68.[i]Nevertheless, metastable NaCl-structure alloys can be obtained by physical vapor deposition due to kinetically-limited low-temperature growth and dynamic low-energy ion-irradiation-induced mixing in the near-surface region.

We investigate the growth of polycrystalline Ti1-xAlxN films by magnetron co-sputtering from separate elemental metal targets, Al and Ti, in a hybrid approach in which high-power pulsed magnetron sputtering (HIPIMS) is combined with dc magnetron sputtering (DCMS). The former sputtering method is known to produce significant ionization of the metal ion flux incident at the growing film surface, while very little metal ions are present in the later case. Thus, this hybrid configuration allows us to selectively control the composition of metal ion fluxes during ion-assisted growth. We perform two independent sets of experiments. In the first set, the Al target is powered with HIPIMS, while the Ti target is operated with DCMS. The positions of the targets are then switched for the second set of experiments. Thus, we separately probe the role of intense Tin+ and Aln+ ion fluxes (n = 1,2) from HIPIMS-powered targets on film growth kinetics, microstructure, and physical properties over a wide range in metastable alloy compositions. We measure the ion flux distribution functions in situ with the PSM 003 Hiden Analytical Mass Spectrometer. The distinctly different flux distributions obtained from targets driven in HIPIMS vs. DCMS modes (see Fig. 1) allow the effects of Aln+ and Tin+ (n = 1, 2) ion irradiation on film growth kinetics, and resulting properties, to be investigated separately. Bombardment with Aln+ ions (primarily Al+ in the Al-HIPIMS/Ti-DCMS configuration) during film growth leads to NaCl-structure Ti1‑xAlxN (0.53 ≤  x≤  0.60) films which exhibit high hardness (> 30 GPa) with low stress (0.2 – 0.7 GPa tensile). In contrast, films with corresponding AlN concentrations grown under Tin+ metal ion irradiation (with a significant Ti2+ component, cf. Fig. 1) in the Ti-HIPIMS/Al-DCMS mode have much lower hardness, 18-19 GPa, and high compressive stress ranging up to 2.7 GPa. The surprisingly large variation in mechanical properties results from the fact that the kinetic AlN solubility limitxmax in Ti1-xAlxN depends strongly on the target power configuration during growth and hence the composition of the ion flux. AlN with xmax ~ 64 mol% can be accommodated in the NaCl structure under Aln+ ion flux, compared with  ~ 40 mol% for growth with Tin+ flux. The strong asymmetry in film growth reaction paths is due primarily to the fact that the doubly-ionized metal ion flux is approximately two orders of magnitude higher from the Ti target, than from Al, powered with HIPIMS. 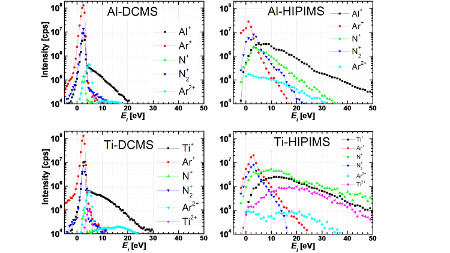 Figure 1. Ion energy distribution functions (IEDFs) obtained with PSM mass spectrometer from Hiden Analytical, UK. Data are presented for Al and Ti targets operated in both DCMS and HIPIMS modes. The DCMS data are time-averaged. For HIPIMS, the IEDFs correspond to the highest target current density, 20-~s, portion of the 200 ~s pulses.