The past decades in the development of plasma-based physical vapor deposition (PVD) techniques have meticulously focused on accessing innovative routes of controlled ion-bombardment during thin film growth. Within this context, high-power impulse magnetron sputtering (HiPIMS) – a technological advancement to drastically enhance the flux of ionised target species involved in conventional DC magnetron sputtering (DCMS) – is rendered particularly attractive for introducing novel means of influencing working gas- and metal-ions incident on substrate and growing film. HiPIMS utilises short (10 – 500 µs), yet highly energetic plasma discharges (up to several kW∙cm-2) at relatively low repetition rates (tens of Hertz to kilo-Hertz) to generate significantly increased plasma densities on the target surface, thus leading to an enhanced fraction of ions present in the film-forming vapor. The increased contribution of ions to thin film growth allows for an enhanced control over the energy delivered to the growing film, revealing new kinetic pathways of controlling the structure-property relationship. Consequently, complementary detailed plasma analysis in the time- and energy-domain has evolved into a vital extension for such ion-based PVD techniques through unfolding the correlation between deposition parameters and ion distributions (i.e., composition, energy, or temporal sequence) arriving on the substrate surface.

In this work, the time-averaged and time-resolved ion fluxes during reactive HiPIMS deposition of Ti1-xAlxN thin films are thoroughly investigated for the usage of Ti1-xAlx composite targets – Al/(Ti+Al) ratio x = 0.4 and 0.6. Ion mass spectroscopy analysis using a Hiden Analytical EQP 300 system revealed, that increasing x in the target material or reducing the N2 flow-rate ratio leads to a proportional increase of the Al+-ion count fraction, whereas that of Tin+-ions (n = 1, 2) remains unaffected despite of comparable primary ionisation energies between Al and Ti. In fact, energetic Ti2+-ions account for the lowest flux fraction incident on the substrate surface, allowing for a high Al-solubility limit in cubic-structured Ti1-xAlxN thin films (xmax ~ 0.63) at low residual stresses. In addition, time-resolved plasma analysis highlights the simultaneous arrival of metal- and process-gas-ions throughout the entire HiPIMS pulse duration. These ion-bombardment conditions, which were dominated by gas-ion irradiation with a significant contribution of Al+-ions (up to ~ 20 %) and negligible energetic Ti2+-ions, allowed for the growth of cubic Ti0.37Al0.63N coatings exhibiting high indentation hardness of up to ~36 GPa at a low compressive stress level (σ = -1.3 GPa). 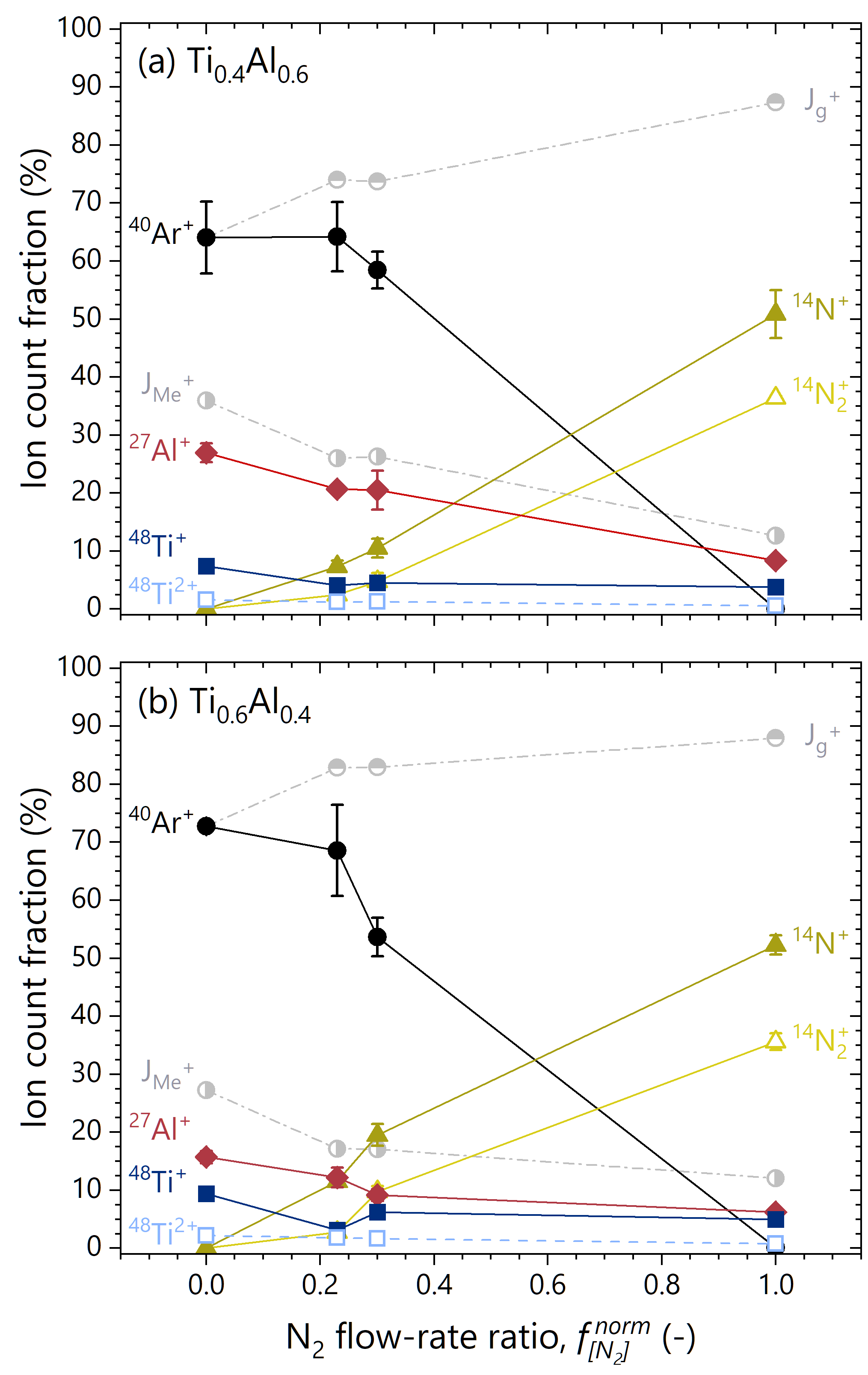 Figure: Integral ion count fractions of the ionic species arriving at the substrate plane measured using a Hiden Analytical EQP 300 system as function of the nitrogen flow rate ratio , presented for (a) a Ti0.4Al0.6 and (b) a Ti0.6Al0.4 target, respectively. The data was acquired at a distance of d = 110 mm from the target surface. Singly charged species are presented by filled symbols and solid lines, whereas doubly charged ions are presented by open symbols and dashed lines. In addition, (a) and (b) contain the total flux of process gas ions  and metal ions , indicated by half-filled circles and dot dashed lines.