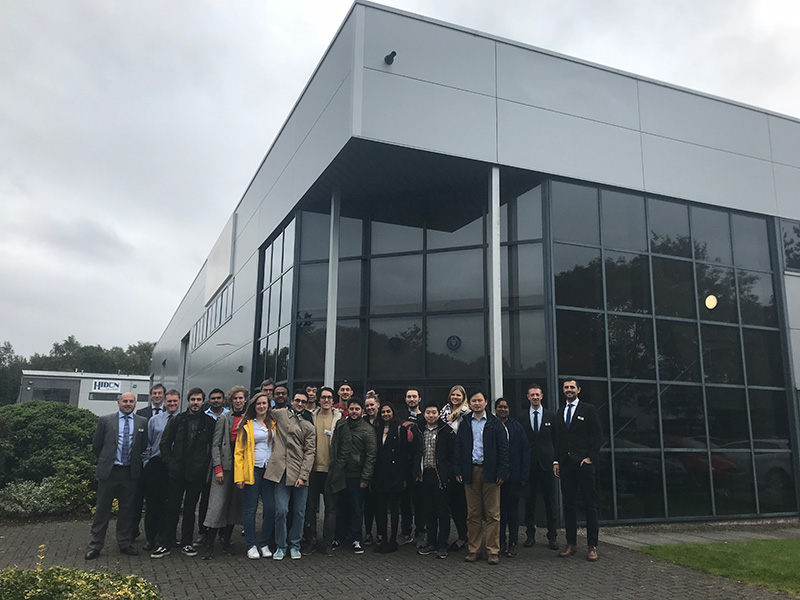 Recently Hiden were presented the opportunity to host the science research group EuroPAH at our company headquarters. The group which consist of 16 PhD students, comprising of 13 nationalities from around Europe, Asia, North and South America, where given tour of our facilities as well as experience multiple demos and presentations of some of our products by fellow Hiden experts. The early stages research’s (ESRs) originally formed due to their engulfing love for science, so with an enthusiastic approach towards an ambitious outreach, EuroPAH’s scientific research goal is to understand the role that polycyclic aromatic hydrocarbons (PAHs) play in the physics and chemistry of the interstellar medium (ISM) with the hope to effectively communicate their research to the public.

Upon arrival at Hiden’s office, the research group were greeted by members of the marketing team as well as Director Peter Hatton. What followed was an informative presentation by Peter, thoroughly enlightening the network team of the background of Hiden as well as the products we produce and industries we have implemented them into.  With the group educated on who and what is Hiden, they were then split into two separate tour groups where they each would then go on to experience several presentation and demos orchestrated by some of Hiden’s experienced professionals; Sam Bort, Dr Graham Cooke, Dr David Lundie and Dr Dane Walker.

One of the first stops of the tour began with Dr Graham Cooke, the Principal Scientist of the company, who prepared an astute presentation for the group detailing the concept of our SIMS workstations; entailing the students on complexity of the software’s designs procedure as well as its many useful outputs and applications within a wide range of industrial and research settings. Students were introduced to Secondary Ion Mass spectrometry (SIMS), a technique for high sensitivity analysis of solids.  They were shown the ion guns that are used to provide the beam which sputters microscopic volumes of the surface under investigation and the mass spectrometer which identifies the fragments.  The extreme sensitivity of SIMS and ability to discriminate isotopes, useful for monitoring diffusion in solids, were of interest, as was the depth profiling mode which allows the concentration of impurities and layers to be determined as a function of depth.   Many of the students asked questions about the effect of ion beams targeting the large molecules that they work with and speculated about what could be interpreted from the subsequent fragmentation pattern. 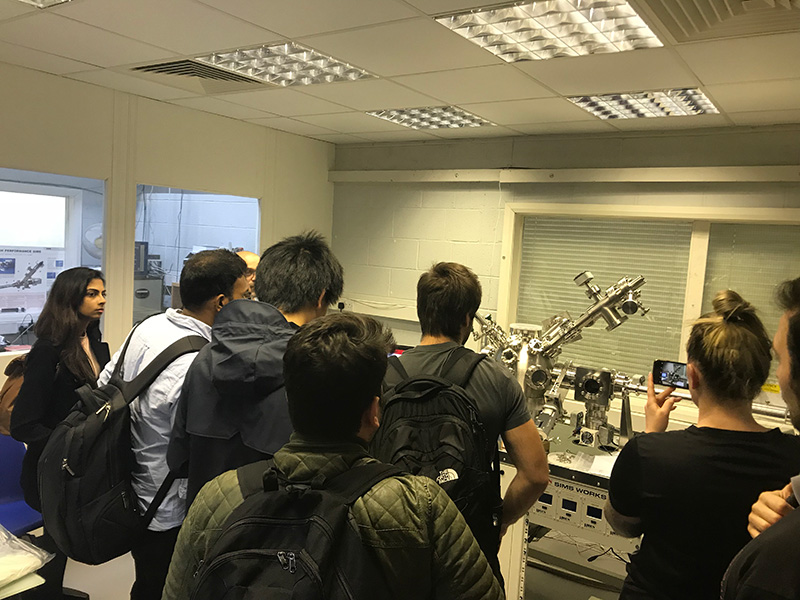 David Lundie, Product Manager, introduced the group to the TPD Workstation, a complete system for UHV temperature programme desorption (TPD). The workstation is commonly used for analysing the surface, interlayer and bulk desorption properties of semiconductor and metal samples using the Hiden triple filter mass spectrometer with PIC detector (3F PIC). The bespoke LabVIEW based software package, TPDsoft, designed to run the system, was demonstrated to show the ease of use of the workstation with simple control of both temperature ramp parameters and mass spectrometer performance, features not always available on the current TPD systems used by some of the students. 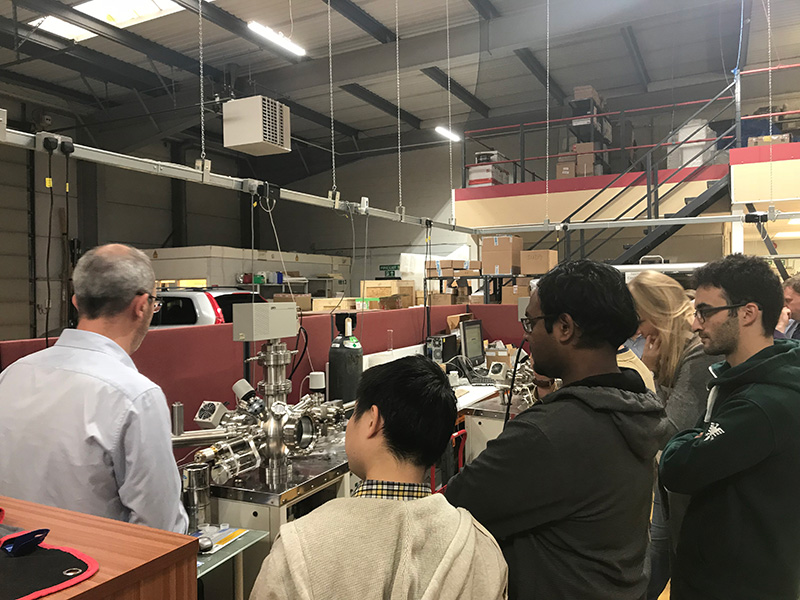 The concluding two demonstrations presented to the group placed focus towards the HPR-60 MBMS and a demo of the QGA software. One of the test and installation engineers, Sam Bort, familiarised the group with Hiden’s HPR-60 Molecular Beam Mass Spectrometer that is capable of sampling directly from atmospheric pressure. Sam demonstrated the instrument’s ability to measure the relative abundances of both ionic and neutral species present in the plume of an atmospheric plasma needle along with the ion energy distributions of a selection of ions. A number of real-world applications for which industry and academia had utilised the HPR-60 were also discussed. 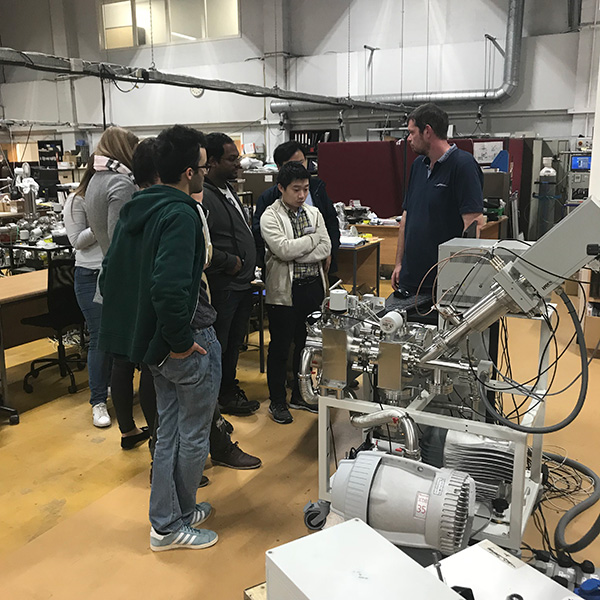 Finally, to end the day tour of the facility, Dane prepared a PowerPoint presentation in which he elucidated the rundown of Hiden’s QGA quantitative gas analysis system, focusing on the devices conception and the endless potential it provides in regards to continuous analysis of gases and vapours which coincide at pressures near the atmosphere. This was a particular important feature we included in the tour, as having previously mentioned, EuroPAH have a strong scientific and research focus towards the understanding of PAHS roles in ISM, and this intrigue this was further shown in the group’s attentive engagement with Dane throughout his presentation and their queries mentioned. 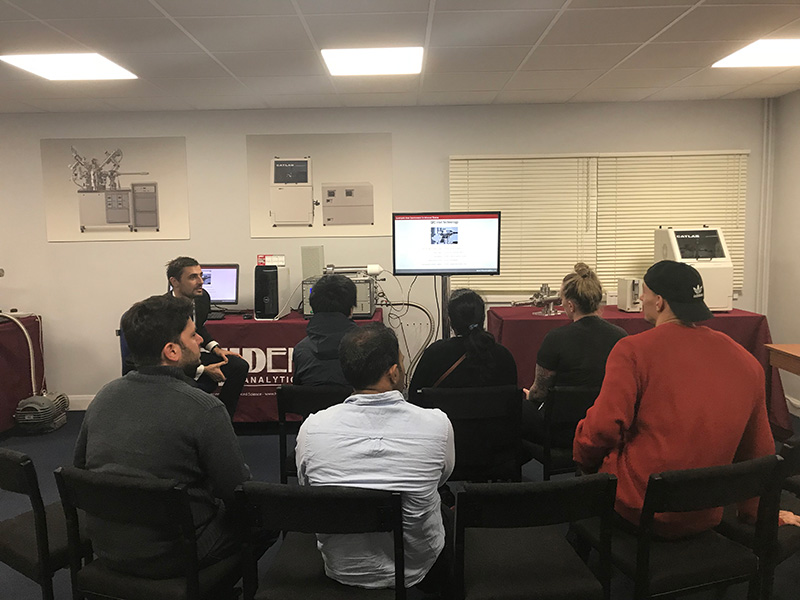 The overall reaction from the group established not only the research projects desire and passion towards the topic of science but the quality of knowledge and experience in which Hiden were able to offer to the upcoming scientists.  This was further confirmed as a number of the team opted to push for further collaboration, as in the near future some members of the group will be spending up to 2 months on secondment to further aid in the development of both themselves and their projects.

For more information on the products involved please see the links below: