The synthesis of amorphous CFx thin films by reactive high power impulse magnetron sputtering (rHiPIMS) was demonstrated in tetrafluoromethane and octafluorocyclobutane atmospheres. All depositions and the plasma characterization by positive ion mass spectrometry (Hiden EQP 1000, Hiden Analytical Ltd., UK) were carried out in an industrial coater (CC 800/9ML, CemeCon AG, Germany) utilizing a substrate temperature of 110ºC and a process pressure of 400 mPa.  The CFx film composition as measured by elastic recoil detection analysis was varied in the range of 0.15 < x < 0.35 by regulating the partial pressure of the F-containing gases from 0 mPa to 110 mPa. Results from process and plasma characterization were related to ab initio calculations and CFx thin film properties. Our DFT calculations predicted CF, CF2, CF3, as well as C2 and F to be the most important precursor species for the film growth in Ar/CF4 mixtures. For carbon discharges in Ar/C4F8 mixtures, additionally, C2F2 was predicted to play a significant role. Results obtained from time averaged positive ion mass spectrometry agree well with our theoretical calculations. 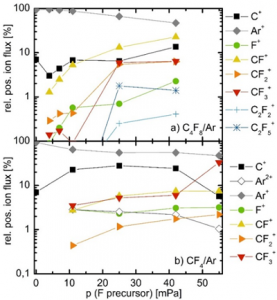 Figure 1 a) and b):  Relative ion fluxes as a function of the reactive gas partial pressure for discharges in a) Ar/C4F8 and b) Ar/CF4 extracted from time averaged IEDFs of corresponding processes.

Here, Ar+, C+, CF+, CF2+, CF3+, as well as F+ were found to be abundant cations (cf. figure 1 a) and b)). The characterization of the rHiPIMS processes revealed moreover two deposition regimes depending on the partial pressure of the F-containing reactive gas; as the partial pressure rises above 42 mPa in Ar/CF4plasmas an ionization cascade progresses, resulting in a rising peak target current and an increased formation of CF4 fragments, especially CF3. In C4F8plasmas the ionization cascade onset was observed for partial pressures above 11 mPa, accompanied with an increased production of CF. These two regimes are mirrored in the thin film properties, particularly in their chemical bond structure, hardness and elastic modulus. The mechanical response of the CFx films can also be related to abundant precursor ions in the plasma; in C4F8 discharges next to Ar+ and C+, CF+ species are most abundant. CF+ and CF possess three dangling bonds, and are consequently reactive as well as able to build strong cross links in the carbon matrix. Therefore, CFx films deposited in C4F8 show an elevated hardness over a wider range of incorporated F (cf. figure 2). 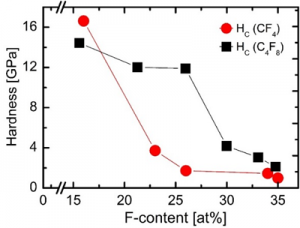 In contrast, for Ar /CF4 discharges CF3+ was determined as the species of highest abundance. CF3+ and its neutral counterpart have one dangling bond and thus does not significantly contribute to cross linking of the growing film. This is mirrored in a rapid decrease of the hardness as the F content in the films increases. Therefore, it can be concluded that the use of C4F8 has advantages with regards to the controllability of the film properties, while CF4 covers a wide range of the applicable process window – thin film deposition and etching. Additionally, the dissociation of CF4 into primarily CF3 and F can be utilized for surface treatments and surface termination leading to low surface energies. Consequently, the rHiPIMS processes in C4F8 or CF4 present a versatile tool for the further functionalization of carbon and carbon based thin films as well as surfaces.