The material density is remarkably variable in the space between the stars (the interstellar medium or ISM) with the densest regions consistent with good laboratory ultrahigh vacuum (UHV). Surprisingly, these dense regions are chemically the richest in space with more than 180 different types of molecules detected to date. However, detection of molecules does not tell us from where the molecules come or how important they might be! Astrochemistry addresses the first question while astrophysics tells us that certain small molecules, such as CO and H2O, are crucial for the formation of long-lived stars like our Sun. They do so by cooling clumps of gas collapsing due to gravity, and on their way to becoming stars, by radiating their thermal energy away. Indeed that is how we know the molecules are there! Without these molecular coolants more massive, hotter and short-lived stars would emerge from the star formation process leaving little time for the chemical and biological evolution necessary for life on any suitable planets orbiting the stars.
However, the densest regions are the coldest at temperatures of 10-15 K, when many molecules including CO are found in solid form on interstellar dust grains. Desorption of CO must therefore happen for this molecule to be used as a coolant for star formation. Conducting temperature programmed desorption experiments allows us to investigate the sublimation of CO from models of these dust grains.
We have constructed, and use, a unique UHV system shown in Figure 1 below. This chamber is capable of conducting dynamic and static experiments and combines thermal atomic and molecular beam capabilities with surface analysis through infrared spectroscopy and thermal desorption mass spectrometry [1].
The CO desorption experiments were conducted by dosing 0.03 to 13.3 monolayers of CO on a Cu sample coated with 300 nm amorphous silica (SiO2) cooled to 20 K. Heating the sample and measuring the gas-phase concentration of desorbed CO with a line-of-sight QMS (Hiden, HAL301) as a function of temperature yields kinetic information on the CO desorption.
CO ballistically deposits on a SiO2 surface and exhibits first order desorption at coverages up to and including a monolayer (Figure 2 left panel). The peak temperature of desorption of CO decreases with increasing coverage as the monolayer is completed. Inversion analysis of the data, assuming a pre-exponential factor of 1012 s-1, tells us that as the coverage increases from 0.03 ML to 0.6 ML then the activation energy for desorption is reduced from as much as 12.2 kJ mol-1 to 8.2 kJ mol-1. The CO molecule is essentially probing a range of binding sites on the SiO2 surface with increasing weaker binding strength as the coverage is increased.
Once the monolayer is completed, increasing the coverage further, 1 ML to 13.3 ML, brings us to a regime where the TPD data have aligned leading edges and the peak desorption rate moves to increasingly higher temperature. This is characteristic of zeroth order desorption of the multilayer. Arrhenius analysis of the data gives a pre-exponential factor of 1028±2 molecules cm-1 s-1 and a desorption energy for the CO film from SiO2 of 7.3 ± 0.2 kJ mol-1 [2].
Knowing the desorption kinetics of CO (and that of other molecules and mixtures of these molecules) from dust grain analogues allows us to understand the rate at which species are returned to the gas phase in the warmer star-forming regions of the ISM and hence their likely impact on the star formation process itself [3]. 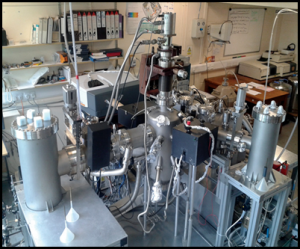 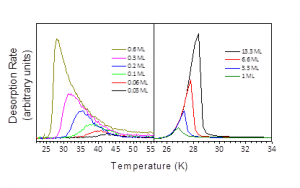 Figure 2: TPD spectra showing the impact of multiple binding sites on the sub-monolayer desorption of CO from SiO2 (Left Panel) and how the temperature of desorption changes as the coverage is increased in the multilayer regime (Right Panel).