Daniel Meysing is a Ph.D. candidate in the Chemical and Biological Engineering Department at the Colorado School of Mines in Golden, Colorado. He is advised by Prof. Colin Wolden and Adjunct Prof. Teresa Barnes from CSM. Here, he describes his research.

Our group began working with the Hiden EQP 500 about one year ago. We are investigating the chemistry and energetics in the radio frequency magnetron sputtering of II-VI compounds used in thin-film solar cells. Sputter deposition of these materials is often treated as a “black box” in which we control the input parameters (sputtering power, pressure, ambient composition) and determine the film properties (optical transmission, conductivity, composition) without detailed knowledge of the process itself. Our goal is to develop a better understanding of some of the complex mechanisms in sputtering that affect optoelectronic properties in thin films. 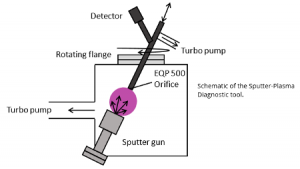 The sputtering chamber, termed the Sputter-Plasma Diagnostic (SPD) tool, accommodates up to six sputtering guns in sputter-up configuration. A rotating flange, on which the Hiden EQP is mounted, and a z-axis motor allow the Hiden EQP 500 analyser to be placed normal to or off-axis to the sputtering target and moved closer to or further away from the target. The EQP is differentially pumped and can be fitted with different diameter orifices so that it can be used over a range of different pressure regimes. We use a 100-µm aperture in the current work to enable analysis at typical sputtering pressures of ~10 mTorr.

Some of our initial work has focused on plasma-generated ion energy distributions (IED) during radio frequency magnetron sputtering of ZnS in a pure Ar ambient. We have probed parameters such as the power, pressure, and flight distance of Ar, Zn, and S ions. Ar ions have distinctly different IEDs compared to Zn and S. The Ar IED has a low-energy shoulder caused by reflection at the target and Penning ionization reactions, whereas Zn and S IEDs have a single dominant peak and often a small high-energy shoulder. In all cases, the Zn and S peaks are ~1.5 eV higher in energy than the Ar peak. The effect of flight distance was investigated by varying the displacement between the target and the EQP orifice. As expected, additional collisions caused the arrival energy of ions to decrease with increasing flight distance. In a similar manner, the ion energy decreased with increasing pressure. 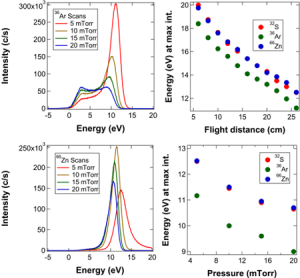