Transient effects in pulsed electron cyclotron resonance (ECR) plasmas are of high interest for applications, e.g. particle accelerators and plasma processing industry.  A research project on this subject is being conducted at ESS Bilbao (www.essbilbao.org) in Spain as a part of a bigger program related to accelerator technology and spallation neutron generation.   T.I.P.S. (Test bench for Ion-sources Plasma Studies) is an ECR plasma generator driven by a 2.45 GHz and 3 kW adjustable power magnetron  that  has been developed to be used as a flexible facility to conduct a research program focused on the plasma physics associated to ECR ion sources performance. 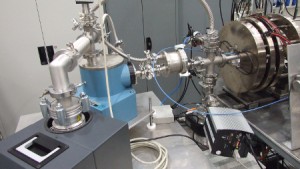 A view of the experiment with time resolved Langmuir probe and VUV spectroscopy diagnostics.

The Langmuir probe system is used for acquiring I-V curves permitting to estimate plasma electron temperature and density. The probe tip is made of 6 mm long, 0.5 mm diameter tungsten wire. Transient effects can be studied by synchronizing the probe with the VUV-emission measurement via a delay generator and building the I-V curve from the data obtained over consecutive pulses. The Langmuir probe driver circuit (ESPion) is made by Hiden Analytical LTD and it acquires a single I-V point in 62.5 ns and rearms itself in another 14.6 ?s required for data handling. The jitter between the timing signals is kept below 200 ns. Each point of the I-V curve is an average of the probe currents acquired over 100 consecutive pulses at fixed probe voltage. Altogether it takes several minutes to acquire a complete I-V curve corresponding to a single temporal data point. The electron temperature Te is estimated from the I-V curve (below) assuming Maxwellian electron energy distribution function (EEDF). 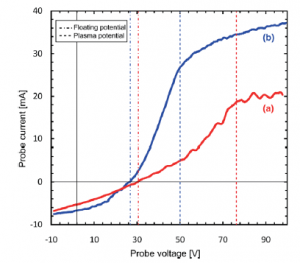 A temperature peak reaching almost 20 eV is observed in coincidence with a drastic reduction of reflected power during microwave coupling process. Such peak is followed by a decreasing behaviour that reaches about 5 eV as final steady state temperature, remaining practically constant during flat top microwave pulse. Electron density reaches stable values about 1.5×1016 m?3 at the time when temperature peak is produced, fact that suggests this process as deeply associated to plasma evolution during breakdown. This is also confirmed by time resolved VUV spectroscopy measurements where similar peaking behaviour observations are recorded for Lyman-alpha and Lyman band emission.