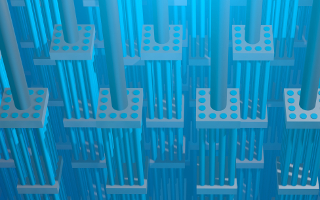 The isotopic sensitivity, and ability to analyse small particles, makes SIMS the ideal technique for the study of nuclear materials.

The spectrum below was measured from a uranium containing glass (under 1% wt.) using a 5keV oxygen primary ion beam and 500eV electron beam charge compensation. The 235U fraction is determined to be 0.55 ±0.02%; less than the 0.72% abundance expected from natural material. 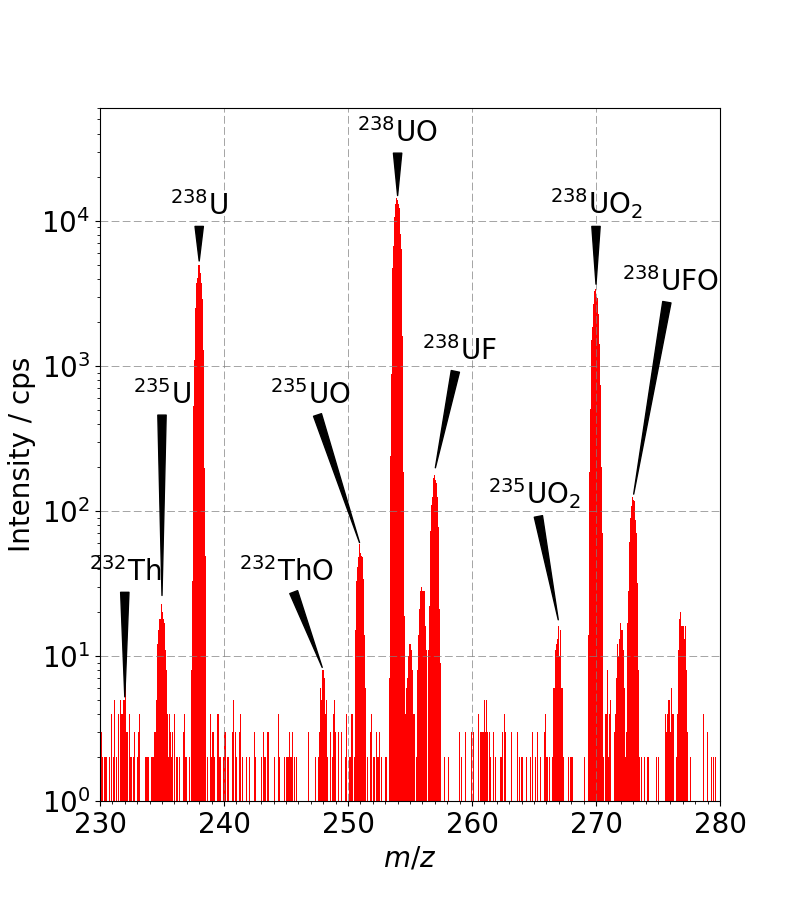 SIMS depth profile data is collected as a function of sputter time which comprises the time taken for individual raster scanned frames and the number of frames in an analytical cycle. The most usual way to calibrate the depth scale is to measure the depth of the crater at the end of analysis (either using a surface profilometer or optical technique) and assume a constant sputter rate. In heterogeneous materials, different sputter rates can be applied for each component.

The intensity scale is converted to concentration by comparison to a reference sample whose composition is well known. This can be a specially prepared material or a previously measured sample. It is even possible to use SNMS (built into many Hiden SIMS spectrometers) to calibrate in the high concentration region which can then be used to quantify low level impurities in SIMS.

In many cases it is unnecessary to fully quantify a measurement, instead the depth profiles can be directly compared to observe differences. This approach can work extremely well detecting changes from the norm in a production environment.

As the primary ion beam is scanned across the sample in a raster pattern, secondary ions are collected as a function of position allowing a mass resolved image to be produced at every cycle within a depth profile, so imaging is actually the primary method of data collection. The lateral resolution of an image depends on the primary ion beam spot size, the ultimate being when a SIMS detector is mounted on a focussed ion beam microscope (FIB) when resolutions of 10s of nm are possible.

Tour of the Hiden SIMS Workstation

High Performance SIMS – Mass and Energy Analyser for SIMS – A2

High Performance SIMS – Mass and Energy Analyser for SIMS – A3

What is SIMS Surface Analysis?

What is Surface Interface Analysis?

How to Analyse the Top Nano Layers of a Material

How to Know Which Surface Analysis Instrument to Choose