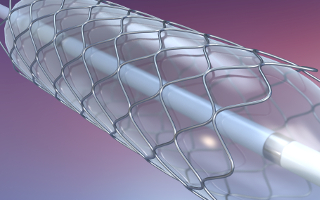 Surface condition of the stent is very important and SIMS can be used to examine the nanometre thick protective chromium dioxide layer which naturally forms on the material.

Stents are wireframe scaffolds, typically laser cut from stainless steel, use to hold narrowed arteries open. Inserted via a catheter, the mesh is placed in the narrow area and expanded using a small balloon which is then withdrawn.

Surface condition of the stent is very important, and SIMS can be used to examine the nanometre thick protective chromium dioxide layer which naturally forms on the material. The depth profiles below show how treating with a chlorine-based disinfecting product leaves the surface iron rich and open to corrosion, potentially causing failure or tissue damage. 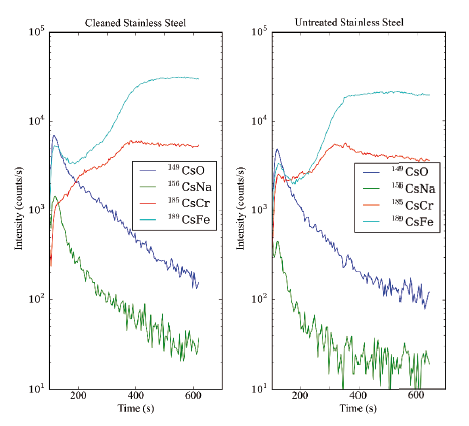 SIMS is the surface analysis technique with the best limit of detection (LOD), often providing ppm and even ppb measurement. If no interfering signals are present, the actual limit of detection depends on the ionisation probability of the sought species, the transmission of the instrument and the analyte volume. Thus, as first two parameters are fixed, if the volume is very small, there will be insufficient atoms present for detection. By collecting the data as images, the pixel sizes can be summed laterally or over a number of cycles to effectively increase the analyte volume and improve the LOD. This means that lateral and depth resolutions can be mutually traded to optimise an analysis for the most desirable parameter.

The secondary ions emitted from the specimen usually have a favoured polarity. For instance, alkali metals are emitted as positive ions and halogens as negative. The probability of ion formation is also enhanced by using oxygen for electropositive elements and caesium for electronegative elements. In addition, caesium can be used in the CsM+ mode, where the element of interest, M, is detected as a molecule with Cs. The CsM+ mode is an excellent means of detecting and quantifying metal oxides and other materials where both electropositive and electronegative elements are sought.

Stents may be coated with polymer layers for protection or to elute drugs into the region to prevent future blockage. Static SIMS can detect and characterise this layer. 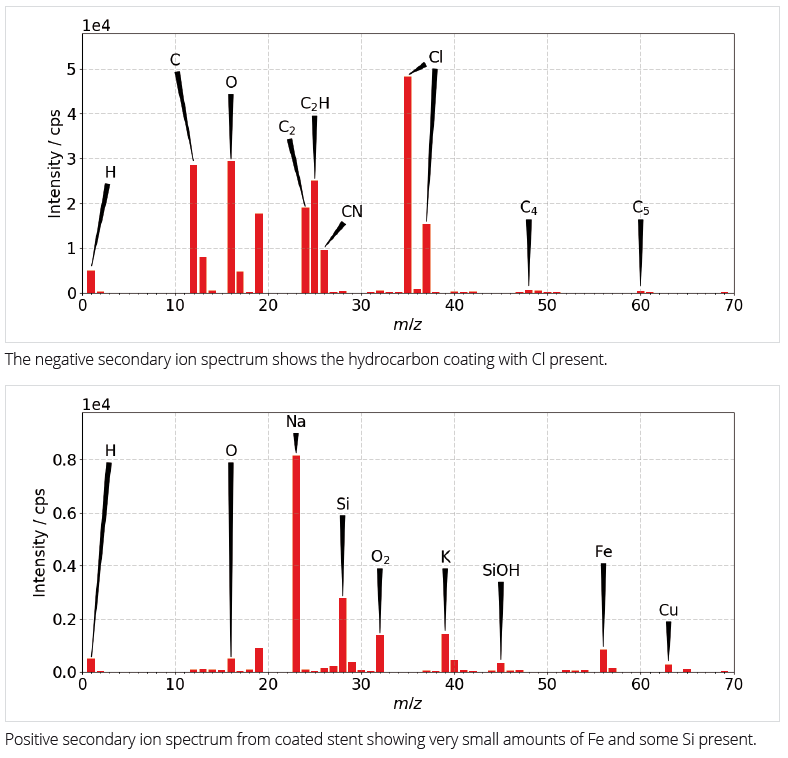 Tour of the Hiden SIMS Workstation

High Performance SIMS – Mass and Energy Analyser for SIMS – A2

High Performance SIMS – Mass and Energy Analyser for SIMS – A3

What is SIMS Surface Analysis?

What is Surface Interface Analysis?

How to Analyse the Top Nano Layers of a Material

How to Know Which Surface Analysis Instrument to Choose